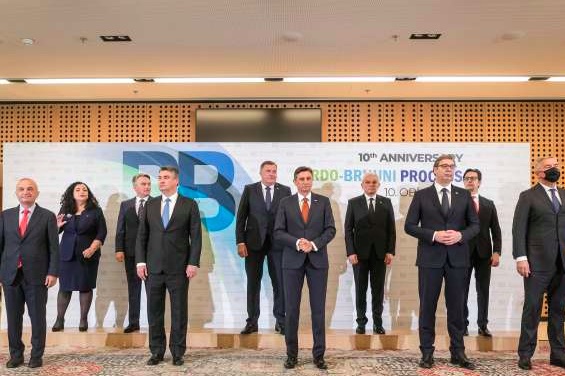 Having gathered for a summit at Brdo pri Kranju on Monday, the leaders of the Brdo-Brijuni Process adopted a declaration to reaffirm their commitment to EU enlargement, but failed to reach a consensus to call against changes to borders in the region due to Serbia’s opposition.

Slovenian President Borut Pahor said the summit, marking the 10th anniversary of the initiative, was one of the hardest, but successful as a consensus had been reached.

“It’s not an empty compromise. It sends out a powerful message,” Pahor said as he addressed reporters after three hours of closed-door talks at Brdo estate.

The Brdo Declaration calls on the EU to see the Western Balkan region as a whole rather than as individual countries negotiating with the European Commission in what Pahor described as the first ever such occasion.

“We call on the European Union to – and really soon – accelerate the accession process and include in the EU the entire Western Balkans, having in mind the progress achieved by each of them,” reads the document, posted by Pahor on Twitter.

The leaders moreover emphasize that the bloc’s enlargement to the whole Western Balkan region is in the EU’s political, security and economic interests, as well as “a geopolitical necessity and a paramount political precondition for a stable, successful and sustainable future of Europe”.

They see enlargement as a mutual process – on the one hand the EU must speed up the process while on the other Western Balkan countries must speed up reforms.

Due to Serbian President Aleksandar Vučić’s insisting on a wording that was not acceptable to other participants, the statement does not mention support for unchangeability of borders in the region, even though, as Pahor said, all the initiative’s leaders are opposed to redrawing the borders.

The issue came up after several alleged non-papers had been circulated proposing changes to borders in the region.

According to Pahor, Vučić did not oppose including the issue in the declaration, but he proposed a wording that would cancel out virtually all diplomatic recognitions of Kosovo.

Pahor hailed the summit as a new chapter in the Brdo-Brijuni Process and Western Balkan countries’ enlargement policy. He also noted the importance of the summit in light of Slovenia’s presidency of the Council of the EU starting in July.

Pahor said there were many differences and divisions heard during the three-hour talks, voices were raised and there was a reconciliation. “In the end we arrived at the messages we feel are very important for people in the region and for EU leaders,” he said.

Addressing the Slovenian government and European politicians he said the Brdo Declaration could serve as “an inspiration” to them for the EU-Western Balkan summit planned in October.

Apart from Pahor and his Croatian counterpart Zoran Milanović, the meeting was attended by the leaders of Albania, Montenegro, Kosovo, North Macedonia and Serbia and the presiding trio of Bosnia and Herzegovina.

Milanović described the declaration as a compromise where everyone had to yield a bit. He said Kosovo President Vjosa Osmani had a very ambitious agenda for the meeting, but in the end some parts had to be omitted from the declaration due to the Serbian president’s opposition.

He noted that the Brdo-Brijuni Process had been initiated by Slovenia and Croatia to support the Western Balkan countries in their accession to the EU rather than to resolve bilateral issues between the countries involved in the initiative.

On the sidelines of the summit, a series of bilateral meetings were held, including the first meeting between Serbia’s Vučić and Kosovo’s Osmani.

Vučić, who left Brdo for Brussels, told reporters earlier in a statement the key thing was there was a consensus for the European path to continue for the whole region.

“We have backed the intentions, wishes and demands of others in the Western Balkans to set a date of visa liberalisation talks,” said Vučić.

He said there were many things at the meeting they did not agree on, including the issue of changes to borders. He said some interpreted border changes in two different ways, whichever way they liked, while Serbia believed they should not be changed beyond the rules.

He said Serbia had always advocated the integrity of borders as recognised by the UN. “This initiative of ours hasn’t been adopted, while we’re happy with the rest of the wording,” he said as quoted by the Serbian press agency Tanjug, adding that some had demanded much more and were very unhappy.