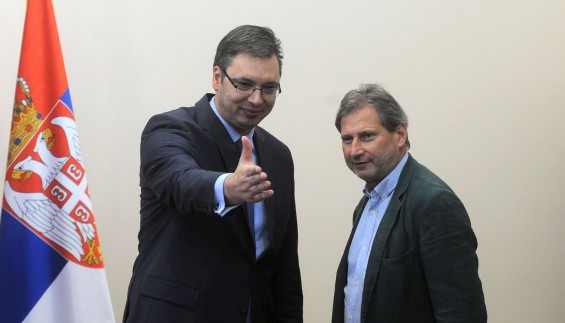 (Chapter 35: Other Issues
Item 1: Normalisation of relations between Serbia and Kosovo)

This position of the European Union is based on its general position for the Accession Conference
with Serbia (CONF- RS 1/14), and is subject to the negotiating principles endorsed therein, in
particular:

– any view expressed by either Serbia or the EU on a specific chapter of the negotiations will in
no way prejudge the position which may be taken on other chapters;

– agreements reached in the course of negotiations on specific chapters, even partial ones, may
not be considered as final until an overall agreement has been reached for all chapters;

– the advancement of Serbia’s EU accession negotiations will be guided by Serbia’s progress in
preparing for accession, which will be measured in particular against Serbia’s continued
engagement towards a visible and sustainable improvement in relations with Kosovo, as well
as the other requirements contained in point 23 of the Negotiating Framework.

The EU encourages Serbia to continue showing commitment to deliver results and progress in the
completion of the implementation work as well to work towards further progress in normalisation.

This chapter does not replace the dialogue between Belgrade and Pristina conducted under the
auspices of the High Representative. Hence, Chapter 35, Other issues, Item 1: Normalisation of
relations between Serbia and Kosovo will be the link between this Dialogue and the accession
negotiations.

In view of the present state of Serbia’s preparations, the EU notes that, on the understanding that
Serbia, while acting in good faith, has to continue to make progress in the implementation work and make further progress in the normalisation process, Serbia can be considered to be sufficiently
prepared at this stage for negotiations on this Chapter. Therefore, the Commission and the High
Representative, recommend the opening of accession negotiations with Serbia on Chapter 35 –
Other issues, Item 1: Normalisation of relations between Serbia and Kosovo.

Serbia should ensure that it completes its part of the work on implementation of 25 August 2015
agreements, in particular on the establishment of the Association/Community of Serb majority
municipalities in Kosovo as well as the other elements of the First Agreement of April 2013 (police,
justice, civil protection). In addition, Serbia will complete its residual commitments under the
previous Technical Agreements. Finally, Serbia should engage in reaching further agreements,
furthering the normalisation in good faith, with a view to gradually lead to the comprehensive
normalisation of relations between Serbia and Kosovo, in line with the negotiating framework.

In line with the negotiating framework, the Commission and the High Representative will monitor
closely and continuously Serbia’s fulfilment of the following first set of interim benchmarks and
report “at least twice yearly”, on this issue, to the Council.

To take into account future developments in the Dialogue, this first set of interim benchmarks will
be updated, as appropriate.

If “progress in the normalisation of relations with Kosovo, significantly lags behind progress in the
negotiations overall, due to Serbia failing to act in good faith, in particular in the implementation
of agreements reached between Serbia and Kosovo”, the Commission will on its own initiative or
on the request of one third of the Member States, in accordance with point 25 of the negotiating
framework, propose to withhold its recommendations to open and/or close other negotiating
chapters, and adapt the associated preparatory work, as appropriate, until this imbalance is
addressed.

1. Implementation of First Agreement (April 2013) and May implementation plan –
Agreements on Energy and Telecoms

• Serbia encourages the full respect of Kosovo legislation by the northern Kosovo municipal
authorities, particularly on procurement and on the remaining open issues from the municipal
Statutes (i.e. the use of municipal stamps and insignia in line with the applicable Kosovo
legislation).

On the Association/Community of Serb majority municipalities in Kosovo

• Serbia contributes to the continuation of the process (drafting of the Statute), within the
timelines agreed and in line with Kosovo law, the First Agreement and the 25 August 2015
Agreement;

• Serbia ensures transparency of its funding to the Association/Community of Serb majority
municipalities in Kosovo.

• Serbia provides quarterly information on the payment of pension benefits to its former police
officers now integrated into the Kosovo Police, as appropriate, to the Kosovo competent
authorities.

• Serbia confirms the end of tenure for all its to-be integrated judicial personnel;

• Serbia provides quarterly information on the payment of pension’s benefits for the integrated
judicial personnel to the Kosovo judicial and prosecutorial councils, as appropriate.

• Serbia adopts the necessary regulations on the discontinuation of payment of salaries and
provision of financial means to the civil protection in Kosovo.

On the Liaison arrangements

• Serbia continues to consistently respect the provisions for the exchange of the official visits;

• Serbia provides the Serb Liaison Officer in Pristina with all necessary administrative support
(for example by paying his rent for the official premises);

• Serbia agrees on the visual appearance on official correspondence that is still not determined
(stamps, symbols and letter-heads);

• Serbia continues to provide security support and access to Serbian interlocutors to the Kosovo
Liaison Officers in Belgrade.

On the Energy Agreement

• Serbia continues to engage in the process of normalisation between the Kosovan
Transmission System Operator (KOSTT) and the Serbian transmission company (EMS),
including by signing an interconnection agreement, and supporting KOSTT’s membership of
the European organisation, European Network of Transmission System Operators for
Electricity (ENTSO-E). This agreement should cover the entire territory of Kosovo in line
with the Energy Agreement;

• Serbia establishes the supply company (called “ElektroSever”) in Kosovo, and fulfils the
conditions under Kosovo legal and regulatory framework for the company to be granted a
supply license;

• Serbia contributes to reaching commercial arrangements for ElektroSever with the existing
distribution company, if it is to be able to carry out distribution services;

• Serbia solves the issue of the Serbian-appointed management of the Gazivode/Ujmani plant.
On the Telecommunications Agreement

• Serbia establishes the telecommunications company as a subsidiary of Serbija Telekom, and
fulfils the conditions under the Kosovo legal and regulatory framework for the company to be
granted a fixed telephony license;

• Serbia respects the calendar and each of the steps agreed which establishes a parallel process
between allocating a 3-digit dial code to Kosovo with granting a temporary authorisation for
existing mobile operations in Kosovo;

• Serbia engages in the co-operation process between telecommunication regulatory authorities;

• Serbia gives its consent, as required, to the ITU allocating the 3 digit code to Kosovo, as well
as the text of the ITU bulletin agreed in the Action Plan.

• Serbia addresses the issue of the existence of re-located Serbian administrative customs
structures with Kosovo denomination;

• Serbia ceases the issuance of documentation or affixing of stamps with denominations that
contravenes Serbian obligations under the 17 January 2013 agreement.

On IBM and joint crossing points

• Serbia completes the establishment of all crossing points;

• Serbia improves control and/or closes alternative roads and by-passes to ensure exclusive use
of official crossing points for goods and persons entering into or leaving Kosovo;

On Freedom of Movement

On Freedom of Movement/Mitrovica Bridge

• Serbia publicly supports the implementation of the Agreement concluded on 25 August 2015,
in particular its timetable leading up to the opening of the Mitrovica bridge for all traffic by
summer/not later than end of June 2016;

• Serbia respects the timelines agreed in the arrangements of 25 August 2015.

• Serbia enables, from their side, Kosovo’s effective participation in remaining regional
initiatives, in line with the jointly agreed terms;

• Serbia supports the inclusion of Kosovo’s representatives in the management and
administrative structures of regional organisations, provided that the merit principle,
comparative analysis and the specific Terms of Reference are observed.

On the recognition of University Diplomas

• Serbia engages constructively with Kosovo on a consistent procedure in order to achieve the
results intended by the 2011 Agreement.

On cooperation with EULEX Kosovo

• Serbia provides public support for the judicial process led by EULEX, including the Specialist
Chambers and Prosecution Office;

3. Further agreements and progress in the normalisation of relations

• Serbia remains committed to the EU-facilitated Dialogue, engages in reaching further
agreements in new subjects/areas, furthering the normalisation in good faith, with a view to
gradually lead to the comprehensive normalisation of relations between Serbia and Kosovo, in
line with the negotiating framework.

In view of all the above considerations, the Conference will have to return to this chapter at an
appropriate moment.