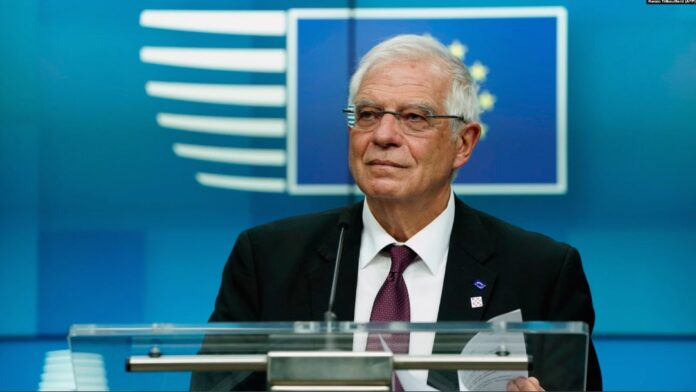 High Representative/Vice-President Josep Borrell met today with President of Serbia, Aleksandar Vučić and Prime Minister of Kosovo, Albin Kurti in separate meetings in the margins of the Paris Peace Forum.

The aim of the meetings was to address the critical challenges in the relations between Kosovo and Serbia. The discussions focussed on helping the Parties to find urgently needed solutions to the current crisis and maintaining peace and stability on the ground.

The High Representative said: “The current geopolitical environment makes it even more imperative to overcome the legacies of the past and engage in meaningful negotiations on what really matters for Kosovo, Serbia, their people and the entire region – which is the normalisation of relations between the two Parties as a key factor for them to move forward on their respective European path.”

Kosovo Serbs should immediately return to Kosovo institutions and resume their duties, and Kosovo should align its actions on licence plates to past Dialogue agreements, and launch negotiations on establishment of the Association/Community of Serb-majority municipalities with no further delay. These obligations, taken under the Dialogue, remain valid and binding.

At the same time, HRVP Borrell underlined the importance of refraining from any unilateral actions and inflammatory rhetoric. With the war in Ukraine, Europe cannot have another conflict on its soil. It is the responsibility of the Parties to avoid this for the benefit of their own people, who stand to lose most if the current escalatory behaviour is not reversed.

Inability to deliver on obligations and de-escalation swiftly will have damaging consequences first of all on the people in Kosovo and Serbia, for the European future of both Parties and their credibility in the eyes of the European and international partners.

The High Representative will debrief EU Member States on Monday at the Foreign Affairs Council about his discussions and provide his analysis of the situation.