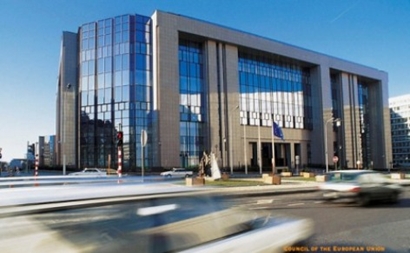 The Council takes good note of the signing in October of the Stabilisation and Association
Agreement (SAA) with Kosovo. This EU-only agreement is the first comprehensive agreement between the EU and Kosovo. Its forthcoming conclusion, entry into force and implementation is without prejudice to Member States’ positions on status. In view of the Commission’s upcoming report on Kosovo’s progress in meeting the requirements of its visa roadmap, the Council stresses the importance of the fulfilment of all conditions set for visa liberalisation and encourages Kosovo to pursue its efforts in order to make progress in its visa liberalisation process. The Council’s intention to resume discussions on a framework agreement allowing Kosovo to participate in European Union programmes is without prejudice to Member States’ positions on status.

The current political stand-off in Kosovo needs to be resolved urgently. The Council condemns this use of violence, in particular for political purposes and the obstruction of the assembly by opposition parties and calls for its immediate cessation. The Council calls for respect of rule of law and for the resumption of normal parliamentary business, in line with the relevant rules and procedures. All sides concerned should address the challenges as part of a joint effort through political dialogue, and engage swiftly on the implementation of all aspects of Kosovo’s European reform agenda.

The Council calls on Kosovo to focus on the implementation of the comprehensive reforms necessary to meet its obligations under the Stabilisation and Association Agreement (SAA). This, and Kosovo’s numerous challenges, will require continued strong political will from Kosovo and sustained assistance from the EU. Particular attention should be paid to improving the rule of law, including judicial independence. Kosovo needs to intensify the fight against organised crime and corruption, and build a track record of successful prosecutions in high-profile cases. Important reforms, such as electoral reform and public administration reform, need to be undertaken as a priority. Effective promotion and protection of human rights throughout Kosovo should be pursued, including the full protection of cultural and religious heritage. In this context, the Council notes positively Kosovo’s recent commitments. The inclusion and protection of persons belonging to minorities and vulnerable groups should be addressed, as well as the strengthening of social cohesion.

The EU will continue to support Kosovo’s socio-economic development as part of its European reform agenda, including through financial and technical assistance. The Council encourages Kosovo to use its 2016 Economic Reform Programme as a platform for growth and employment.

The Programme should reflect the recommendations provided in the Joint conclusions of the Economic and Financial Dialogue between the EU and the Western Balkans of May 2015. Within this framework, the Council urges Kosovo to address the socioeconomic issues of direct concern to its people and to build broad public support for this reform agenda. Regulatory and supervisory bodies should be fully operational. Kosovo needs to follow up on its commitment to decommission and rehabilitate the Kosovo A power plant, the single biggest source of pollution in the Western Balkans.

The Council welcomes the significant progress in the EU facilitated Dialogue, in particular with the agreements reached on 25 August 2015. The Council urges Kosovo to swiftly implement its part of these agreements and to engage constructively with Serbia in formulating and implementing future agreements. Kosovo needs to maintain its active and constructive engagement in the normalisation process with Serbia. The Council will continue to monitor closely Kosovo’s continued engagement towards visible and sustainable progress in the normalisation of relations with Serbia, including the implementation in good faith of all agreements reached so far, so that Kosovo and Serbia can continue on their respective European paths, while avoiding that either can block the other in these efforts and with the prospect of both being able to fully exercise their rights and fulfil their responsibilities. The Council recalls that progress in the process of normalisation of relations with Serbia is an essential principle of the SAA and underpins the development of relations and cooperation between the EU and Kosovo.

Kosovo should continue to cooperate closely and effectively with EULEX and contribute actively to the full and unhindered execution by EULEX of its mandate, including a revised mandate after June 2016.