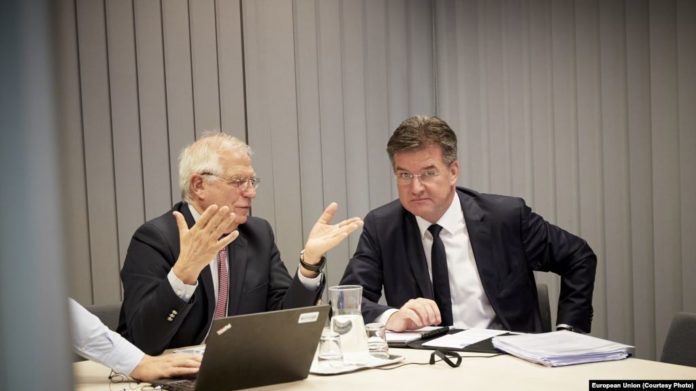 Kosovo/Serbia: Statement by the High Representative on the recent developments

The recent developments in the relations between Kosovo and Serbia put years of hard work and achievements reached under the EU-facilitated Dialogue between Belgrade and Pristina at risk and hamper the security situation in the region and beyond.

The European Union calls both sides to refrain from any unilateral actions, which might lead to further tensions.

The withdrawal of Kosovo Serbs from Kosovo institutions is not a solution to the current disputes. It has the potential to further escalate the tensions on the ground.

We call on Serbia and Kosovo Serb representatives to respect their Dialogue obligations and return to the Kosovo institutions to fulfil their duties, including in the Police, Judiciary and local administrations.

At the same time, the EU again urges Kosovo authorities to respect their own obligations without delay. This means immediately extending the process of re-registration of vehicles and suspending any punitive action against KM plate holders. The licence plates issue can be resolved by the Parties under the Dialogue.

The EU also calls on Kosovo to start immediately steps to establish the Association/Community of Serb Majority Municipalities. The Kosovo Assembly has ratified the Brussels Agreement and Kosovo’s Constitutional Court ruled that the Association/Community needs to be established. Therefore, its establishment is a binding legal obligation for Kosovo. Continued failure to implement this obligation undermines the principle of Rule of Law and damages Kosovo’s reputation and credibility.

It is the responsibility of the Parties to ensure peace and stability. Any actions, such as burning of cars, or intimidating rhetoric that could lead to tensions, are unacceptable and will trigger an appropriate reaction by the international community.

In close coordination with NATO/KFOR and the Kosovo Police, the EU Rule of Law Mission (EULEX) is standing ready to ensure stability on the ground in Kosovo in its role as second security responder. EULEX and KFOR will continue supporting to maintain a safe and secure environment in line with their respective mandates.

The EU urges the Parties to choose the path of Dialogue in earnest, and refrain from any action that would lead to violence and confrontation. The EU stands ready to continue to facilitate negotiations, but both Parties need to show readiness to seek solutions in a constructive manner and respect their obligations made in the Dialogue.