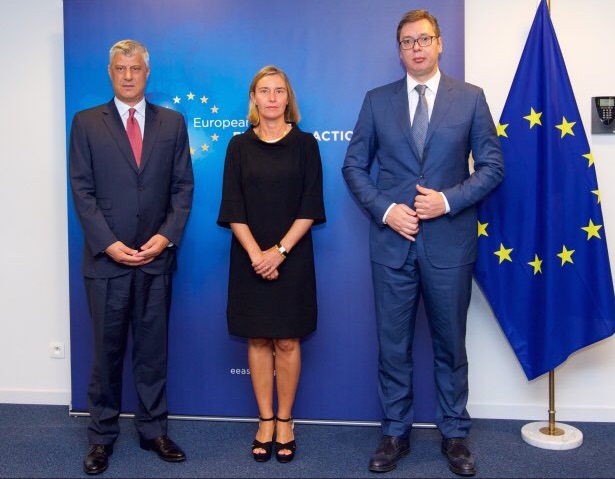 Federica Mogherini, High Representative for Foreign Affairs and Security Policy/Vice-President of the European Commission, hosted this morning in Brussels another meeting with the Presidents Hashim Thaçi of Kosovo and Aleksandar Vučić of Serbia.

They followed up on their commitment from the last meeting on 3 July where they agreed to start working on a new phase of the Dialogue between Belgrade and Pristina for normalisation of relations and reconciliation. Work on this will continue in the coming weeks.

Both sides today agreed the final steps for the implementation of the Justice agreement reached within the EU facilitated Dialogue. The Presidents confirmed that the agreement will be fully implemented on 17 October 2017. On that day, Judges, Prosecutors and judicial staff will be integrated into the Kosovo Judiciary. The integration of the judicial personnel will allow for justice to be delivered across Kosovo and, in particular, in Mitrovica region.

The High Representative welcomed the renewed commitment by both Presidents to the process. She reiterated that the EU and she personally is fully committed to the European Union perspective of Serbia, Kosovo and the entire region and that progress by both sides is firmly linked to progress in the Dialogue.